Skip to content
close
Today deal sale off 70% . End in . Hurry Up
close

Size GuideAsk a Question
SKU: JELG0006-1N/A
Order in the next to get it between and hoursminutes

This dress is made to order and turn around time is around 6-8 weeks. If you need rush service, please contact us prior to placing your order.

Standard size orders, please refer to our size chart for made to order dresses.

Custom size dress will be made based on measurements provided. Measurement form will be emailed to you once your order is placed. Let customers speak for us

Just absolutely stunning love the dress! My daughter absolutely loved it and so did her date

Just to be upfront, I was extremely nervous ordering my dress. My husband and I are renewing our wedding vows and this is my dress for the ceremony. To order something so important online, never seeing the dress in person or trying it on left me scared to death. From start to finish this has been an amazing experience! You all were very prompt with all of your communications, updating me every step along the way. I received my dress faster than expected, and the dress, what can I say other than you exceeded my expectations. The material is luxurious, the dress is well made and it fits great! I could not have asked for a better experience with you. Thank you so much! Jamie

This is such a beautiful dress! Fits perfect and looks just like the pictures.

Beautiful dress. The overall effect is stunning. However, there are areas of messy sewing, white thread visible/loose/irregular thread. For the price point I would expect a higher quality stitch etc. 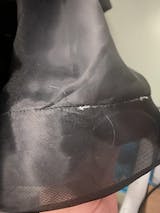 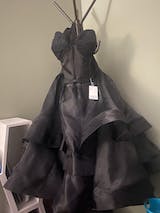 I feel okay about my dress and for me that is simply not enough. I paid $300 for a prom dress that I genuinely loved in the photo and ended up with a lesser version that is okay. In my opinion, that should not have happened. I needed to get it altered to satisfy my shape (which is fair for clothing pieces for events like prom). The material of the dress is nice and of substantial quality, not, $300 quality I would say. The composition of the dress itself is decent, not, worth $300. Now, the color I ordered did not match the color in the photo; the dress I received is brighter and lighter. Also, I can tell the fabric of my dress is not the same as what is in the picture. The dress is nice sure, but it did not live up to the picture (which is what I thought I ordered). I know you might want something special and different from everyone for prom, but look somewhere else because here is not worth the money. I personally think I should have ordered from somewhere else that had nicer, better quality dresses, and was $100 less cheaper than here. Again, the dress is nice, but it is, unfortunately, a lesser version of the picture. If I could resend it, get my money back in time, and order another prom dress, I would most certainly do that. I took a chance because I wanted to truly believe I’d receive what was in the picture and that is partially on me. Listen to your discernment and pick a better dress elsewhere. I was not thrilled at all when I tried the dress on for the first time and the several times afterwards in order to convince myself I liked it the way I liked what I saw in the photo. Had the dress been cheaper, I would have given the dress more leeway, but absolutely not because I could have saved $100 and gotten something MUCH more pleasing with the fabric I thought I was getting from this photo. Contacting the business was better than other reviews lead on and I got my dress in time for the date I had entered for my order. I’m just unhappy that the expectations of the picture vs the actual dress I received was not met. I gave the review a 3 stars because that is what the dress is to me out of 5. The star review is me rating the dress I received in itself and disregarding what I was lead on to thinking that I would receive. If I incorporated the money and the difference from the photo…the star review would be a 1/1.5 out of 5.